This online workshop focuses on a selection of three haiku, chosen by Alan Cummings, and presented along with his literal translations.

This workshop has been generously sponsored by if:book as part of the Dot Award, set up to encourage literary authors to develop new work inspired by digital possibilities for literature. We are aiming to experiment by inviting translations not only into English but into any other medium: from audio to animation, photographs to sketches (Masaoka Shiki, popularised the idea of the haiku as ‘shasei’ or sketching).

You can submit a text translation through the form at the bottom of this page. If you’d like to submit audio, video images or any other media, please fill out the submissions form and, in place of poem text, please include a link to a Soundcloud, YouTube, Vimeo (and so on) where we can view your submissions and embed it on the MPT website.

You are welcome to translate as many as you choose: just a single haiku, two or even all three.

Please send us your translations by 20 May and translator Alan Cummings will pick the best to discuss on our podcast.

Help on translating this poem

Haiku are 17 syllable poems, normally written in a single line in Japanese. In English, they are often translated into a three-line poem, where the syllable count follows the original 5-7-5 syllable pattern of the Japanese. Some translators, however, prefer to translate haiku into a single line, while others use two lines.

Haiku traditionally combined linguistic and imagistic elements drawn from both the classical and vernacular language, often making play with the contrast between the two. The classical poetic tradition in Japan had created a canon of words and images that were thought of as being appropriate. For example, in the second haiku we are looking at, by Buson, the first word ‘harusame’ (spring rain), is a resolutely classical term, found in hundreds of preceding poems dating back centuries. In contrast, the image of the seashell is not one that is used in the classical tradition.

Some linguistic features of the Japanese language enable the brevity and the flexibility of haiku. For example, nouns are not specified as being singular or plural. Rather, it is up to the reader to decide whether Sugita Hisajo pursued a single butterfly or a cloud of butterflies into the spring hills.

Likewise, Japanese lacks any definite or indefinite articles. Pronouns are very commonly omitted, and there is no way to tell from the verb whether it applies to a first-person singular subject or a third-person plural one.

Alan Cummings is Senior Lecturer in Japanese Studies at SOAS University of London. He works on early modern Japanese literature and theatre. Amongst his translations is Haiku: Love (British Museum Press, 2013).

Notes from the translator

Enomoto Seifu (1732-1815) was born into a samurai family and began to write haikai under the inspiration of her stepmother. Her poems began to appear in haikai anthologies from the mid-1750s onwards, increasing in numbers after the death of her husband in 1770. In her late years, she became a Buddhist nun, taking the name Seifuni (Star Cloth Nun). Some things to think about in this haiku:

Yosa Buson (1716-1784) was a Japanese haikai poet and painter, one of the greatest haikai poets of the premodern period. Born in a village near Osaka. Buson later moved to the capital city, Edo, where he began to study poetry. He later travelled in the footsteps of his idol Bashō around northern Japan, before finally settling in Kyoto in his early 40s. Compared to Bashō, Buson is more concerned with the sensual world and is often fascinated by the creation of visual, aesthetic and dramatic effect in his poetry. Notes on this haiku:

Sugita Hisajo (1890-1946) was born in Kagoshima, Kyushu. After her marriage, she began studying haiku with the well-known poet Takahama Kyoshi and became an active member of his haiku circle, even publishing her own haiku magazine. However, in 1936 for reasons unknown Kyoshi expelled her from his circle. Heartbroken, she gradually stopped writing haiku and died in 1946 at a sanitarium. Notes on this haiku:

Springtime drizzles on the beach;

the little shells soak up the rain

blissfully placed at tree’s base

head made of white bone

Down under, lose buoyancy

A faceful of bones

On the sawtoothed shore

Drifts me, deep into spring woods

among the roots of laughter

Funeral in March / Seaside in April / Walks in May

Lying under the spring ground

The rain is falling

Enough to set sheen on shells

Giving in to shade then sun

the good fortune of a skull

beside the tree trunk

tiny shells on the beach

deeper into the mountains

rests beneath the tree

blossoms, there it is, smiling

rain in the springtime

small shells on the beach

deep into the springtime hills

and losing my way

deep into the hills—

to lose them there

spring hills are getting lost

Are lying over now contented

The mist settles in a cove

Straying from the track 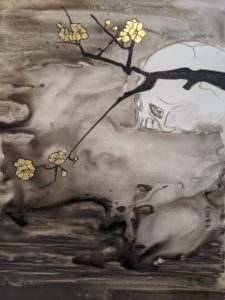 The butterfly hunts
as the spring hills profoundly
became absent

Beneath the blossoms
Falling, the lucky bones of
A fallen figure.

A sprinkle of spring rain –
For the small shells on the beach
To get wet enough.

Chasing butterflies
Deeply in the spring mountains
One gets lost at last.

Spring is unfolding before my eyes 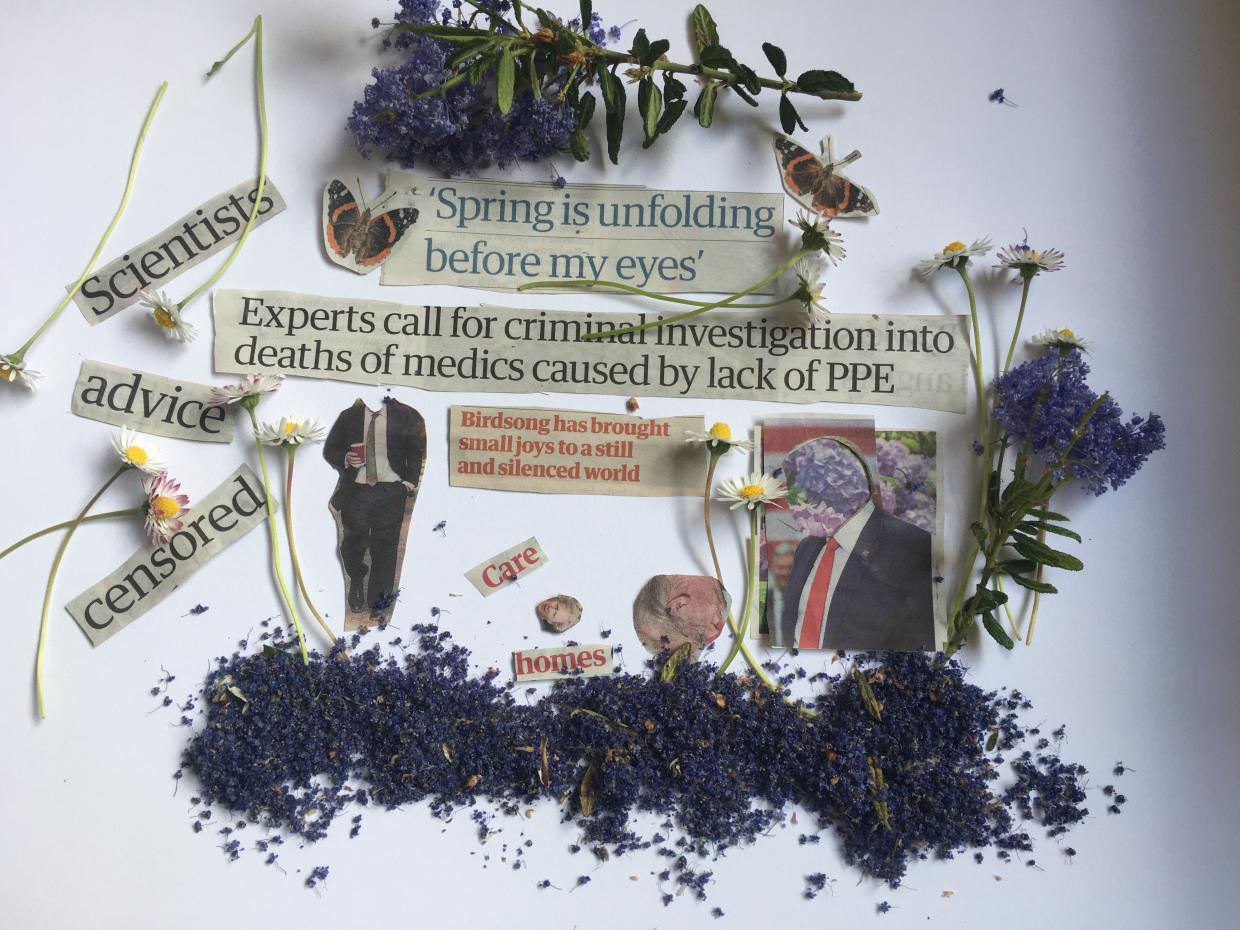 I have made a collage poem in response to the haiku by Enomoto Seifu which Alan Cummings has translated ‘literally’ as follows:

Here is my collage poem which I’ve made by cutting up items from Saturday’s Guardian newspaper and adding fallen blossom and other natural debris from my garden in Wiltshire.

under the falling blossoms ¡the contented skull!

spring rain
on the seashore wee shells so wet

chasing butterflies
far into the mountains–
let’s get lost!

Three haiku made into English lines

cherry blossom falling on a skull

spring rain wets the small shells on the beach

A cherry blossom, corrupted
its children have fallen but –
beneath its roots, a lucky omen, skin and bones remain

I surrender to YOU.
I chase the butterfly through our spring hills
But what have I lost?

cherry blossom falls
on the peaceful skeleton
in eternity

chasing butterflies
far into the spring mountains
where I lose myself 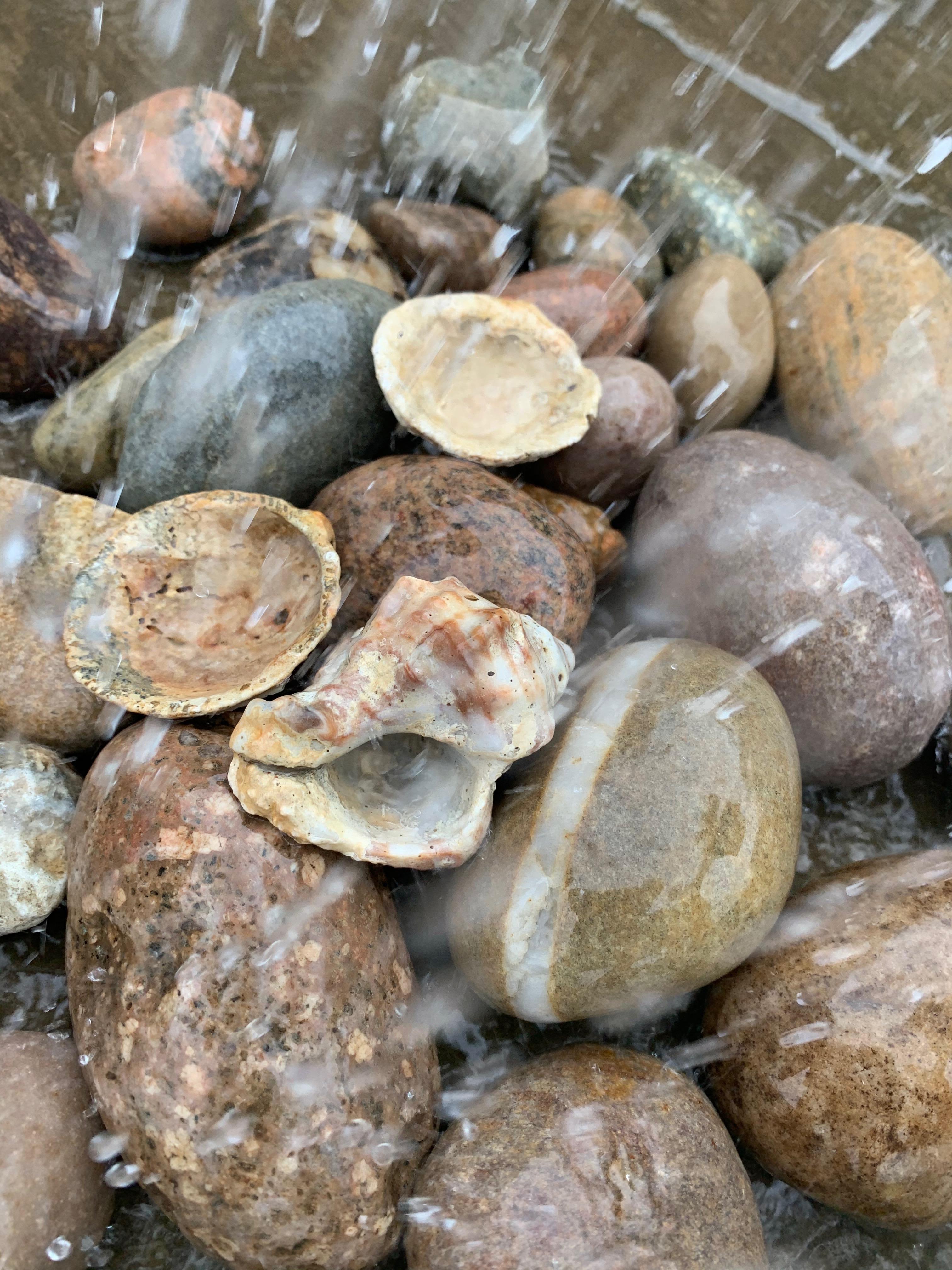 I decided to translate all three haiku and embed them within a mini game created using the Bitsy game engine. I like how Bitsy’s limited 3-colour palette calls to mind the haiku 3-line structure.

Use the keyboard arrows to move around the room, interact with objects and read the haiku.

now Spring’s come for you.

ah! I lost myself.

So soft the drizzle

One shell in countless.

When blossom floats from branches

blossoms fall like snow
down to – look, there, grinning,
it’s a fucking SKULL

FROM ALL THAT IS BENEATH US

A video piece ( YOUTUBE LINK TO VIDEO ) made in response to:

floating down to dry bone smiles,

on the beach. A drizzle kiss

There is no set path

for the butterfly’s quest

Butterfly chase through luscious hills, one gets lost!

In the second lunar month of lockdown

Notes from a sanitarium

Deep in the Spring mountain –

We lose our heads!

Inspired by this exercise and because I was translating these Haiku in the middle of the night whilst breastfeeding our newborn son, I ended up writing three new Haiku inspired by the originals.

I am currently living in Alzira in Valencian Country, Spain, and our nearby mountain La Murta (Myrtle Mountain) is often surrounded by low lying cloud, the local Xúquer river has swelled with the Spring rains and the Super Pink Moon was a highlight of my late night breastfeeding shift, in early April.

In the second lunar month of lockdown

Blessings on his head

to moisten this beach’s

Deep into the Spring Hills

Blossoms snowing down
joyfully underneath it
a skull it appears

The Stage between the Lines

cherry petals
fluttering down
on a skull exultant

chasing a butterfly deep in the spring hills

Translation of Haiku 1, Enomoto Seifu’s ‘falling blossoms’. The video poem I have produced can be viewed on You Tube – link below.

under the falling blossom a grinning skull

chasing butterflies I stray deep into the spring mountains

In a Light Breeze (haiku 1)

Photos can be found here: