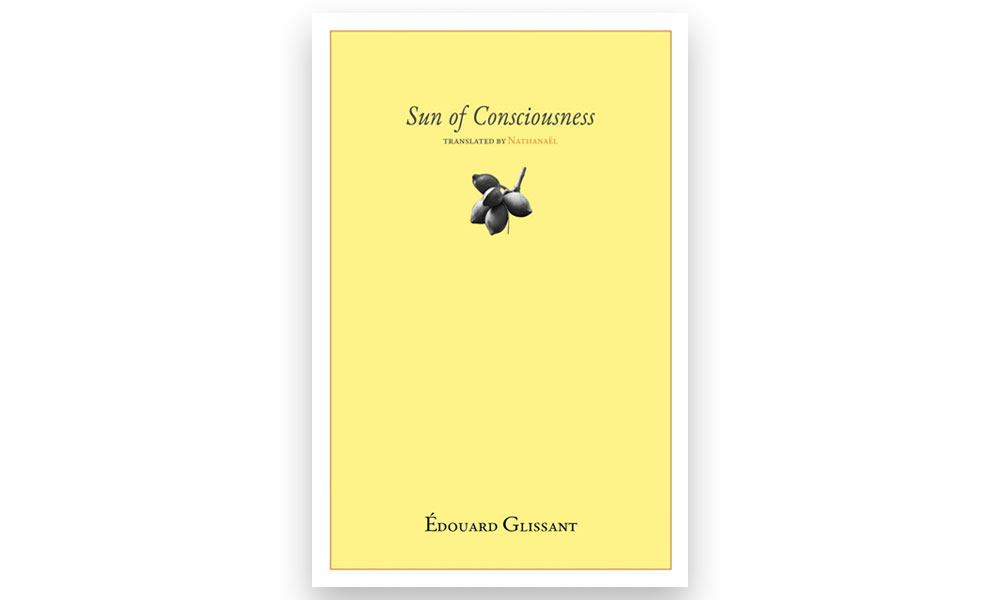 Sun of Consciousness by Edouard Glissant, translated from French by Nathanaël, Nightboat Books, 2020.

Originally published in 1956, Sun of Consciousness (translated from the French by Nathanaël) is one of the earliest works by renowned Martinican author Edouard Glissant. Foreshadowing much of his oeuvre as whole, it is a subversively hybrid text encompassing poetry, essays, and philosophical meditations. The work hinges on the author’s arrival in Paris from the Antilles for the first time in 1946, where he was due to study at the Sorbonne, entering the French capital ‘through the gray hole of the Gare Saint Lazare’. It is this physical displacement that sparks his reflections on the relationship between the self and the world, and his exploration of the impact of the colonial legacy on the Caribbean consciousness, which would come to characterize much of his work.

Sun of Consciousness mines the geographical contrasts between Glissant’s homeland and Europe, the lush vegetation of the island of Martinique set against France’s flat cultivated fields, filled with ‘shifting wheat never tousled by the drunken ascent of a comb’. These represent the rigour and rigidity of the European mind, where uniformity and ‘measure’ reign, which initially has a stifling effect on Glissant – as an Antillean both familiar with and estranged from French culture – but also leads him to gain a greater self-knowledge: ‘my landscape is a temper yet; the symmetry of plantings hinders me. My time is not a succession of seasoned hope, it is still of surges and breaches of trees.’

Punctuated by febrile fragments of prose poetry, Glissant’s writing darts between various registers in Sun of Consciousness. Certain passages are beguilingly intimate, evoking the student scribbling at dawn in his Parisian garret (‘the smell of stones, the patience of the quais […] the black velvet of the snows, all night the ink of despair’), while others are oracular in scope, as the poet vertiginously contemplates the grand sweep of history to then look towards the future: ‘from the crime of first falterings, to the centuries, swollen | The word! like a lane of flame trees, crying mercy’. Perhaps most powerfully, there is the elemental register of the natural world and the living earth, which recurs throughout the book, ‘the high cliffs that ever you carry inside you, open them for a Word, open the dawn in the rock’. At times, Glissant’s idiosyncratic syntax can threaten to sound convoluted in English, but Nathanaël’s crisp stylistic rendering keeps the translation grounded where it needs to be, and imbues the vivid imagery of the prose poetry with admirable fidelity to the raw energy present in the original French.

‘For we are, all, gathered on a single shore. The Atlantic that we must now cross, is the chaotic darkness that our very illuminations make.’ Through interrogating received notions of universality, Sun of Consciousness contains the seeds of Glissant’s famous notion of the Tout-monde (All-World), which attempts to replace ‘totalitarian modes of thought’ with an attitude of openness and inclusivity, embracing unity through difference. This book articulates Glissant’s vision for a future in which literature defies nationality, as he adopts the stance of the poet-seer, calling for a gradual decolonization of the mind through a ‘continuous movement of literature […] marching toward yet other lands.’

Laura Garmeson is a writer, journalist and translator from Portuguese and French. Her work has been published in the Financial Times, Asymptote Journal, 3:AM Magazine and The Economist, among others. She is based in London.