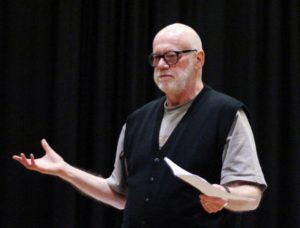 This is the wall, Melissa; behind its stones,
A garden which bees, your body, fill with their drones.

From her crumbling fresco, his wrathful angel’s gaze
ignites my air. Raising her sword, she loses a feather:
it spirals through the winds of empires and dynasties
to wind up in Lalić’s pillow, where his face is baptised
again by his own sweat and tears: his old nightmare,
that garden by the playground where no bees drone
only the birds flying over in rows. They deliver gifts
as red as Easter eggs; painted metal shell-casings
litter the grounds beside schoolchildrens’ bodies.
Now he dreams a church, people tied like kindling.
He weeps, I can’t stay silent: the walls stayed silent
and crumbled. His face crumbles. The church burns.
An angel’s smile unfurls from the ash like a new leaf,
a poem; eggs for the fresco gather again into shells;
she fans them with her golden wings and leans over,
she whispers See, on this wall a stain grows a face.

Poetry wants to be a contagion.
― Jorie Graham

Dream into being a lost city into and call it Lygos,
Byzantium, Czargrad, Stamboul or what you like:
speak its mosaic of languages, taste their honey.
Dream a city an empire, a faith, a state of mind
and body ― that drone of bees behind your ribs
is its busy streets, its great dome rings your skull.
Dream a city forever dividing along invisible lines
that rise to heaven like Isidore’s fiery walls of Eden:
Orthodox one side, heretic the other. Then vice versa.
Dream a city where plague is a poet hiding presents
in armpits he renders as baskets of salt-cast flowers,
scabs as jewels for his Fabergé Housekeeper Eggs.
One hatches a golden bird that can bend all tongues
to its clockwork song, mean anything and everything,
protected by all the king’s horses, all the king’s men
as winds shake the city and walls begin to crumble.