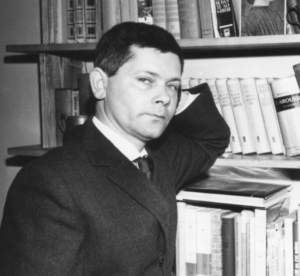 a poet with all the strength of an Antaeus
Seamus Heaney, Herbert’s The Collected Poems

Zbigniew Herbert was a Polish poet, dramatist and essayist. In 1944, following the Second World War, his hometown Lwów (Lviv in Ukrainian) became a Ukrainian Soviet city, and the Polish population was expelled as part of the Soviet process of ‘de-Polonization’. As a result Herbert relocated to Proszowice, near Krakow.

Herbert was an economist and a lawyer, and a vocal opponent of Poland’s Communist rule. He was unable to make a living as a writer under the Stalinist regime, as his style did not fit the Socialist Realist style obligatory in art and literature. Czesław Miłosz, his translator and Nobel Prize-winning poet, wrote of Herbert: ‘Before 1956 the price for being published was to renounce one’s own taste and he did not wish to pay it.’

It was after the end of Stalinism in 1953 that Herbert emerged fully as a poet. Introducing his work in Modern Poetry in Translation No.1, the editors note that Herbert’s style ‘derives from the pre-war anti-romantic modernist movement’ and that he is ‘perhaps the best among the young Polish poets at expressing the survivor’s ironic appraisal of the historical revelations of the last two and a half decades’.

The Longobards is characteristic of Herbert’s poetry – imaginative and vivid, with a distinctly modernist style that imbues historical figures with contemporary energy:

Herbert was also an accomplished essayist and dramatist, and the main part of his work published in Modern Poetry in Translation No.1 takes the form of a radio play, ‘Reconstruction of a Poet’.
Herbert’s poems published in Modern Poetry in Translation No.1 are some of the earliest examples of his work being circulated outside Poland. A few years later in 1968, Herbert’s Selected Poems, translated (as in this issue) by Czesław Miłosz, along with Peter Scott Dale, was published in the USA and England. He was soon recognised as one of the most important modern Polish poets.
Seamus Heaney described him as ‘A poet with all the strength of an Antaeus… He shoulders the whole sky and the scope of human dignity and responsibility.’