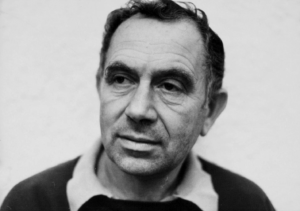 Yehuda Amichai was born in Germany in 1924. He moved to Israel with his family at the age of 11 when Germany was in the grip of National Socialism. He is often recognised as Israel’s most significant modern poet, and alongside his immense popularity in Israel he is widely translated with a large international readership.
He fought in the Second World War with the Palestinian brigade of the British Army, and later, with the Israeli Army in 1956 and 1973. He studied Bible and Hebrew Literature at the University of Jerusalem, and published his first book of poetry Now and in Other Days in 1955.
Amichai was one of the first modern poets to write in Hebrew, and his writing is credited with helping to shape modern Hebrew literature.
In an interview with the Paris Review, Amichai said:

What we were experiencing was a free-fall into modernism at exactly the same time a Jewish state had begun. It was more than a turning point in the Hebrew language—it was a time of radical change.

He credits a religious upbringing for developing a sense of history, and was fascinated by ‘fairy-tale shaped history‘. However, Amichai himself was not religious, although in his poems he engages in philosophical struggles with questions of faith. Indeed ‘King Saul and I’, from Modern Poetry in Translation No.1 is more satirical and ironic than it is theological, and introduces a sense of pathos to the Biblical story. It ends with the terse lines:

The poems featured in Modern Poetry in Translation No.1 are varied in style and subject matter. They are preceded by a short introduction by Amichai:

Yosef ben Matityahu (Josephus Flavius) was a field commander of the Judaean Army in Galilee that fought Vespasian and Titus. He went over to the Romans, and wrote the history of the campaign he had fought. He chose to write about what he had been involved in. I agree with Josephus. I want to be involved and avoid writing, and then to be detached and write. The debate continues as to whether Josephus was, or was not, a traitor.

This unusual piece of prose highlights his awareness of the tension between a military life and a writer’s life, the uneasy contrast between observation and participation.
Amichai was a playwright, novelist and short-story writer as well as a distinguished poet. By 1965, when his poems were featured in Modern Poetry in Translation No.1, Amichai had published four other volumes of poetry and one of short stories. His Collected Poems was published by Schocken Books on 1963, and in the same year his novel, Not Now, Not Here, came out. His play, Journey to Nineveh, was produced in 1964. By then he had been awarded the Schlonsky Prize for his prose, and two ACUM prizes for his poetry.