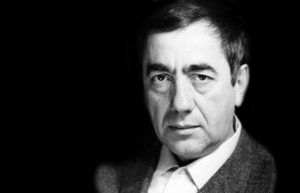 Vasko Popa was a Serbian poet of Romanian descent. He was born near the town of Vršac in the Banat region of Northern Serbia, then a part of Yugoslavia. In the Second World War, Popa joined Tito’s Communist underground, and he was imprisoned in a German concentration camp at Bečkerek (now Zrenjanin, Northern Serbia). After the war he graduated from the Faculty of Philosophy at Belgrade University, and published his first major collection, Kora (Bark) in 1953, the first of his eight books.

Francis Jones writes that Popa came to the forefront of a new ‘avant-garde’ poetic movement in the early 1950s. This movement formed a powerful challenge to the more representational lyrical style of poetry that then held sway.
Though often surreal in quality, Popa’s vision differed from the inter-war surrealist school. In the introduction to Popa’s work in Modern Poetry in Translation No. 1 the editors write, ‘the surrealists’ lack of belief in the efficaciousness of poetry has been left behind. Popa’s work is epic in tendency. A step towards the realisation of grand proportions, without returning to classical concepts, is the cyclic scheme into which he organizes his verse.’

All of Popa’s poems were grouped into cycles, including The Quartz Pebble, One Bone to Another, Games and The Small Box, which are featured in Modern Poetry in Translation No. 1. These poems also highlight Popa’s gift for creating mythologies that are magical and vivid, with imaginative detail both epic and precisely felt.
Popa’s poems are incantatory, and the opening lines of ‘The Quartz Pebble’, written in 1951 and featured in Modern Poetry in Translation No. 1, read like an invocation. The MPT editors describe this poem as ‘the basic principle of his cosmology’:

From The Quartz Pebble

By the time Modern Poetry in Translation No. 1 appeared, Popa had published two collections and edited three anthologies ‘of national poetic lore, of poetic humour and of poetic dream visions’. Later, in his introduction to Vasko Popa: Complete Poems, Ted Hughes wrote that ‘Popa’s imaginative journey resembles a Universe passing through a Universe. It has been one of the most exciting things in modern poetry, to watch this journey being made’.