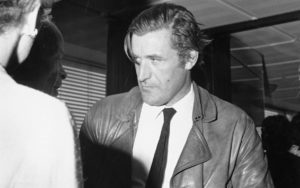 A gable, a psychic gable that you could put your back to.
Seamus Heaney

Ted Hughes and Daniel Weissbort met at Cambridge in the early fifties where they both studied as undergraduates. Ted, five years older than Daniel Weissbort, was already a graduate when Weissbort, together with David Ross, published some of his early poems in a student publication called Saint Botolph’s Review in 1956.
The two men remained friends and when, in the early sixties, Ted Hughes conceived of Modern Poetry in Translation, he turned to Weissbort to help him realise the magazine. In a letter to Weissbort, written in 1982, Hughes looked back at the founding of MPT, writing: ‘I remember walking up North Tawton Main Street with you saying the only people who would ever get anything out of the Mag would be you and me.’ Weissbort replied that he remembered a different moment at a New Year’s party: ‘You said something like, “why don’t you start a magazine of poetry in translation?” […] I… was fired by the idea.’

Hughes and Weissbort had been engaged in translation and the reading of poetry in translation for a while. In a retrospective piece Hughes wrote in Modern Poetry in Translation: 1983, he says, ‘If the Modern Age burst from its crib in the 1914-18 war, it came to consciousness of itself in the sixties. It was forced into consciousness. Once can easily understand the suddenness of the need to communicate, to exchange dreams and revelations and brainwaves, to find a shared humanity on the level of the heart. The flux of poetry translation followed inevitably. And not only on the level of the heart. The translation of poetry became important, almost political business.’

A number of important translations appeared in the early sixties to mark this new flowering of internationalism. Translations from that period by Michael Hamburger, W. S Merwin, Robert Bly, Ruth Fainlight, and the Imitations of Robert Lowell are mentioned in Hughes’s prose and in correspondence between Hughes and Weissbort. A 1963 anthology of Hungarian poetry The Plough and the Pen, introduced by W. H. Auden, included Kenneth McRobbie’s translation of Ferenc Juhász’s ‘The Boy Changed into a Stag Cries out at the Gate of Secrets’ – Hughes later produced his own powerful poem on the basis of McRobbie’s translation and wanted to make an early issue of the magazine dedicated to Juhász.
Material for the first issue of the magazine piled up: it came from friends and contacts and Hughes gathered names and poems with enthusiasm. A visit to the Spoleto Festival dei Due Mondi in 1965 brought him into contact with both Miroslav Holub and Zbigniew Herbert. Hughes described this period as a translation ‘boom’:

‘In the end, as the boom neared its peak, with publishers calling for more, and almost every poet we know busy with translation, it seemed easier to let the magazine take off than to keep it grounded. The sheer pressure of material forced the issue.’

Hughes and Weissbort threw themselves into the magazine and their intense correspondence shows their interest in every aspect of editing from paper choice to advertising. It was Hughes who suggested the ‘airmail’ or Bible paper for the first issue. According to designer Richard Hollis, Ted had the utopian idea that every poet in the world should receive a copy of the lightweight magazine. Hughes was also involved more practically, looking for distributors, subscribers and wellwishers
Hughes had begun to work on his own translations of poetry, but always as a collaborator or co-translator with a speaker of the language. A collection of co-translations of Yehuda Amichai appeared in 1969 (Poems). By the late sixties he was collaborating with the Hungarian poet János Csokits on the poems of János Pilinszky (a Selected Poems appeared in 1976 with Carcanet New Press). He was also a supportive advocate of the translations of others. The translations of Vasko Popa by Anne Pennington had a long and enthusiastic introduction by Hughes.
In 1967 Hughes founded the bi-annual Poetry International Festival in London. The festival was extremely popular – it harnessed all the energies of the ‘translation boom’ and the first festival brought Ingeborg Bachmann, Pablo Neruda, Zbigniew Herbert, Hans Magnus Enzensberger amongst others to London, where they performed to large audiences (MPT later became the official programme issue of the festival). Translated poetry was briefly, and in no small way due to Hughes’s efforts, the new rock ‘n’ roll.
Ted Hughes was profoundly interested in international poetry, and in the exchange of poetic styles and matter. In the editorial of the first issue he and Weissbort wrote that ‘…closer acquaintance with what is being written elsewhere can only stimulate poetry-making in this country.’ There is no doubt that the work he encountered and engaged with stimulated his own poetics. The scholar and poet Tara Bergin has written on how Hughes’s Crow, in its pared-back language and imagery, can be seen to owe something to the work of the Eastern European poets Hughes was advocating and translating, particularly Pilinszky, with whom he had a longstanding and fertile poetic relationship.
His co-translator János Csokits wrote of his translations: ‘It was almost as if he could X-ray the literals and see the original poem in ghostly detail like a radiologist viewing the bones, muscles, veins and nerves of a live human body […] The effect is not that of a technical device; it has more to do with extra-sensory perception.’
Whilst Hughes’s poetic voice is unique and pretty unmistakable, even in his translations of other poets, he had very particular views on how translation should be done. He favoured a sort of literalism, writing in Issue 3’s editorial:
‘The very oddity and struggling dumbness of a word-for-word version is what makes our own imagination jump. A man who has something really serious to say in a language of which he knows only a few words, manages to say it far more convincingly and effectively than any interpreter and in translated poetry it is the first hand contact – however fumbled and broken – with that man and his seriousness which we want.’
Whether or not we agree with Hughes’s ideas about translation, we can see that he was motivated by a sense of curiosity and the desire to read poetry from other cultures on its own terms, without filtering or ‘domestication’. He wanted to allow that poetry to enter him and ‘stimulate his poetry-making’ with its strangeness. It was this curiosity that drove him to found both Modern Poetry in Translation and Poetry International.