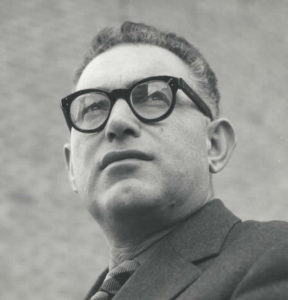 Robert Friend (1913-1998) was a poet and translator. He was born in New York and settled in Israel in 1950, where he taught English and American literature at the Hebrew University of Jerusalem. He published ten collections of poetry (one posthumously) and translated many poets from Hebrew into English, including selected works by Ra’hel, Lea Goldberg, Natan Alterman, and Gabriel Preil. Menard Press published an anthology of his Hebrew translations posthumously in 1999, edited by Gabriel Levin: Found in Translations: A Hundred Years of Modern Hebrew Poetry. A selection of his poems, Dancing with a Tiger: Poems 1941-1998, edited by Edward Field, was published by Menard Press in 2003. He was the featured translator in Modern Poetry in Translation Issue 14 ‘Palestinian and Israeli Poets’.