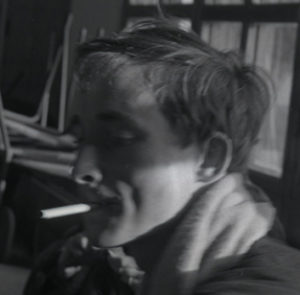 Richard Hollis has been a freelance graphic designer since 1957. He trained and later taught at various London art schools.
Hollis first worked as a silk-screen printer from his flat in 18 Rugby Street and it was here he came into contact with Ted Hughes: his neighbour downstairs was the poet and translator Daniel Huws, a friend of Ted’s and later a contributor to MPT. Ted and Sylvia Plath stayed for a time in Huws’s flat.
In the early sixties Hollis worked in Paris, and he was art editor at New Society weekly between 1966 and 1968, the time when Hughes and Weissbort were most occupied with the magazine. Hollis writes that the first broadsheet issue of MPT was produced by the printers of Peace News, a pacifist paper with (at the time) a similar broadsheet format.
The actual process of putting a magazine together in 1965 was time-consuming and mechanical, and a far cry from PDFs and MacBooks – typesetting was an actual physical process. Hollis gave MPT its distinct functional aesthetic and saw MPT through a number of different designs. He also continued to work on book design, and his iconic design of John Berger’s Ways of Seeing, with its text beginning on the front cover echoes some of the later MPT covers, which juxtapose running text and image to great effect.
Hollis described the working process of the early magazine in an email:

‘Copy (translated poems) were send via Danny Weissbort to me to mark up for the typesetter. Whatever the printing process, until computer typesetting there were always paste-ups, and for several years these were produced on boards as ‘camera-ready’ artwork. Sometimes Danny would supply photographs, but any image for the covers was usually left to me. I almost always read the proofs. […] I didn’t often meet translators, but occasionally poets: Zbigniew Herbert came with Ted, and Joseph Brodsky with Danny, for example. After a few issues Ted’s involvement lessened, although there was a meeting in Danny’s house with an Amichai translator who was asked by Ted how the translation was so much shorter than the original and Ted suppressed his laughter when the reply was: ‘But I make a new creative entity’.

An exhibition of Richard Hollis’s work opened in London in 2012 and travelled to the Centre Pompidou, Paris, and to Lausanne and New York. He has lectured widely in continental Europe and has written several books on graphic design history. As a publisher he edited and produced two memoirs of Ted Hughes: Memories of Ted Hughes 1952–1963 by Daniel Huws; An Essential Self: Ted Hughes and Sylvia Plath by Lucas Myers and Ted Hughes and Translation, by Daniel Weissbort.