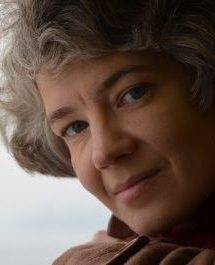 Krystyna Dąbrowska is a poet, essayist and literary translator. She has published three poetry books: Biuro podróży (Travel Agency, 2006), Białe krzesła (White Chairs, 2012), Czas i przesłona (Time and Aperture, 2014). In 2013 she won two of the most prestigious Polish literary prizes awarded to poets and writers: the International Wisława Szymborska Award and the Kościelski Award. Her poems have been translated into English, German, Spanish, Italian, Russian, Swedish, Greek, Bulgarian, French, Portuguese and Chinese. A collection of her poetry will be published in Italy in November 2017 and in Austria in 2018.
In the US her poems have appeared in Harper’s Magazine and The Los Angeles Review, and are forthcoming from The Threepenny Review, Ploughshares, and the New England Review.
Her translations include poems by W. C. Williams, W. B. Yeats, Thomas Hardy, Thom Gunn, Ruth Padel, Charles Simic, letters by Elizabeth Bishop and Robert Lowell, and the early satires of Jonathan Swift.