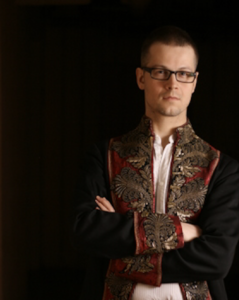 Jacek Dehnel, born in 1980, is a poet, novelist and translator. In 2005 he was one of the youngest winners of the Kościelski Prize for promising new writers.
He has published five volumes of poetry and ten of prose. His first novel, Lala, tells the story of his grandmother’s life. His second, Saturn, is based on the life of Francisco Goya, and depicts his painful relationship with his son. His third, Mother Makryna, tells the true story of a 19th-century fraudster who claimed to be an oppressed Catholic nun. His most recent novel, Krivoklat is the monologue of a lunatic compelled to destroy great works of art.
Several of Dehnel’s books have been translated into foreign languages. Available in English are the novel Saturn (Dedalus, 2012) and Six Polish Poets, and anthology which he edited for Arc (2009). This year Aperture, a poetry collection translated by Karen Kovacik (Zephyr Press)will be published in English, and in spring 2018 the novel Lala, translated by Antonia Lloyd Jones (Oneworld Publications).