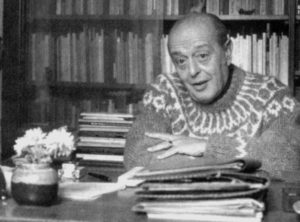 by Ivan V. Lalić
Translated by the author

by Ivan V. Lalić
Translated by the author

a virtuoso display of metaphor and image
Gerard Smith, The Irish Times

Serbian poet Ivan V. Lalić was born in Belgrade in 1931, in what was at the time known as Yugoslavia. He was eight years old when the Second World War broke out, and during the war experienced the deaths of many of his school-friends in an air raid – a trauma that affected him profoundly. Lalić is quoted as saying ‘my childhood and boyhood in the war marked everything I ever wrote as a poem or poetry’.
After the war he graduated from Zagreb University with a degree in Law. The editors of Modern Poetry in Translation No. 1 note that ‘his first appearance as a writer was in 1951, with a translation of Rimbaud’s Le Bateau ivre’, and he remained a prolific translator of French, English and German poetry. His poems featured in this issue of Modern Poetry in Translation are self-translated.
Lalić was well-recognised as a major figure in European poetry, both at home and internationally, and he was awarded several literary awards in Serbia. His poetry became known to English readers through Francis Jones’s and Charles Simic’s translations. Lalić’s books in Jones’s translation were twice awarded the European Poetry Translation Prize: in 1991 for The Passionate Measure, and in 1997 for A Rusty Needle (jointly with David Constantine’s Hölderlin).
Modern Poetry in Translation No. 1 contains only a small amount of Lalić’s writing – just two poems: ‘Love’ and ‘An Inventory of Moonlight’. Both poems crackle with vivid imagery:

For years I have known that we were disappearing together;
You burnt through by the star of my memory, outside which
You exist less and less; I being gracefully distributed in you,
In all the afternoons, all the rooms, all the days,
In everything that fills you slowly, like sand
Silting the river-bed; and this moment of ours
Last longer than another’s death.

A house demolished sixteen years ago,
A house populated by impure fire, and children
who, according to tradition, have become angels,

From An Inventory of Moonlight

Ivan Lalić died in 1996. In his obituary in the Independent, Celia Hawkesworth writes of ‘the central place in his work of memory: fragile in the face of the collapse of civilisations, but all we have. Memory allows the poet to recreate brief instants of personal joy as well as to conjure up a sense of the distant past. It allows each of us, as individuals condemned to solitude, to connect with a shared inheritance and feel, for a moment, part of a larger whole.’