Communal Supper of a Sacred Hare

In the first scenario it was a fox that caught
the spoor of a hare fresh enough to be worth following
and waiting for a gust of wind.

Before the hare got to an asphalt road,
its neck was broken and its body chilled.

In a different scenario it was an eye of a hen eagle
that glimpsed the hare’s shadow. On a cropped field by the road
the hare’s senses stood no chance.

Hungrily but carefully the fox strips flesh from the back legs.
From the other side with spread wings the bird of prey
gulps down the intestines.

They have no time to notice the road or cars.
the hare is already half-consumed,
incisor teeth and the hook of a beak come closer together.
They ascend the white ribs as if upon a staircase.

It’s snowing and for the first wind
with the taste of sea foam
a man comes out of the house.
The eternal November brings
a message from an icy desert, where only the pure survive.

You come out after him,
wrapped only in a sheepskin coat, you shove to the front
the big girl with dark eyes,
and the smaller one with eyes like yours.
Before the moon turns around at full,
You’ll give birth for the third time.

But in the man’s voice something growls, the north.
And the wind won’t stop speaking,
it rustles in the memory, asks questions. Where and when.

The surface is broken by cold, fear by desire,
polar light by awakening. You are. Here. With him.

Never wholly yours,
your man. He won’t leave today.

Published in Songs of the Shattered Throat, 2017 Number 1 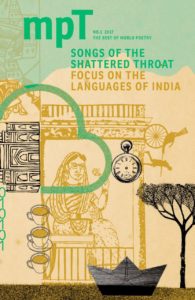