The tuft of chest hair was proof enough for them.
The vast shank of marble, relinquished by the earth,
Its brutish melancholy, this brooding muscle-man
Could only be him: the savage from the wilder myths
About the artful sea-wolf, plaything of Poseidon.
Spliced like a tree trunk he came to the museum,
As though disfigured by an axe.
What had they done
To the monstrous birth, a real life infant, prepared

In formaldehyde and displayed there as a specimen?
Forehead smashed, where once that one eye stared?
Was this a second chance to whop the Golem Greek,
Like Odysseus’ shock troop back in the day? To blight
The Devil’s handiwork was held to be a Christian deed.
So the Cyclops was left a rump, for fear of the evil eye.

Love in a Time of Exile and War

Published in The Constellation, 2014 Number 2 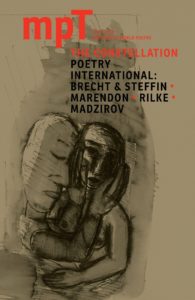