You own no coffin to drag across the snow,
just a dog shivering in the dark.

Daughter-tongue: creak of the juniper.
Your shudder at birth’s a shard chipped off
a storm among the planets

and the clouds, the clouds blindly race
obliterating from the skies
all trace of lineage.

Antonella Anedda was born in Rome in 1958, of a Sardinian family. The languages she was brought up hearing, however, were, apart from Italian, Logudorese, Catalan from Alghero, and Corsican French mixed with the dialect of La Maddalena, an island off the coast of Sardinia. Her three books of poetry so far, Residenze invernali (Winter Residences) 1992, Notti di pace occidentale (Night of Western Peace) 1999, winner of the Premio Montale, and Il catalogo della gioia (Catalogue of Joy), 2003, and her two books of essays, are written exclusively in Italian, though in a recent interview she has remarked of her Italian: ‘I could say that I write in a foreign language which I lose and rediscover at each new occasion.’

Her writing in Sardinian is of relatively recent date:

‘It began after an operation…I can only say that at a certain time the sounds that rose in my memory were these harsh ones of a pre-scholastic language, thick with consonants and shorn of adjectives. And I understood my own Italian in the light of those sounds. When I translated (these poems) from Sardinian to Italian I saw that one language steered or guided the other and that most likely I had always “translated” into Italian from that language.

‘I don’t know if I will write other poems in “limba logudorese” [the language considered the most pure – that is spoken and written in central Sardinia], but this experience has involved a descent into “una lingua non bassa ma profonda” (“a language not low, or vernacular, but deep”) which Luigi Meneghello speaks of.’

I think that also for the reader these new poems in Sardinian shed light on her earlier poems in Italian. From her first book with its insistently Russian subjects and atmosphere, a sense of otherness and estrangement has been a marked feature of her work, which has a slow, resistant, compactness of phrase – a poetry in which nouns are given great weight and essentiality, a quality of ‘thingishness’, or Dinglichkeit. What’s most unusual in her work is the combination of a severe distance of perspective and an abrupt, sometimes searing intimacy of tone. Her new poems in Sardinian suggest that this particular combination may also involve an encounter between two distinct languages.

Published in Series 3 No.4 - Between the Languages 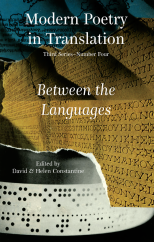