Lyotard said, every sentence is a now
No. Actually it’s a memory of now

Every memory is a poem
In our books, the count of the unwritten poems is so much more

With a career spanning over two decades and six books to his credit, Geet Chaturvedi is one of the most widely read contemporary Hindi authors. His poetry delights the reader with its inner lyrical beauty and playfulness, as well as its sensitivity and sensibility of ideas and imagination.

This sensitivity is reflected in the poem ‘The Memory of Now’, which is a string of images and impressions, a kind of conversation the poet often holds with his favourite people in his poems, here his favourite being Eduardo Chirinos, the Peruvian poet. The poem was written for Chirinos as a tribute soon after his death. Geet and Chirinos knew each other only through the written word, through poetry and an exchange of emails. Just days before his death, Chirinos wrote a heart-warming email to Geet: ‘I try to take advantage of the rare moments in which I feel fine reading and writing…’, and mentioned ‘Tomorrow (I hope) I will send the PDF…’. It never happened. Theirs was a bond of much warmth and mutual respect. The poem ‘Big Papa’s Funeral’ is based on a teenage memory and the title reminds us of the Marquez novella. With its theme of secret love, the artistic memory of this poem revels in the mundane and the sublime.

Two Poems from The Hunchbacks’ Bus 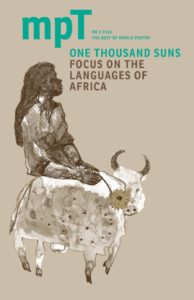