Today I asked a tailor
to cut me another shadow,
a cheap one,
but a truer fit.

As soon as he was done
he got to his feet and was gone.
I took it off the hanger,
but didn’t know how to put it on.

There was plenty of light
as I left the shop,
his tools had been left out,
but the master was gone.

When I first encountered Hamit’s poems they were in spoken English, approximate versions of the Turkish originals translated by him ‘off the cuff’. They were brilliant – aphoristic and philosophical in the foreground, featuring strong sudden narratives, powerful images and ideas, and in the background they seemed risen from a troubled political climate. Notwithstanding their brevity, they were extremely dimensional and dynamic pieces. Looking at them in Turkish on the page I become aware of their formality, but Turkish sentence structure bears little resemblance to English, having a different order of subject, object, verb and noun. The initial ‘heavy-lifting’ work of translation was done by Hamit himself, whose English is excellent. I did little more than shape and arrange, play with meter and rhyme, draw out ideas. I’ve edited poetry over the years, but I write fiction. I’m also blind to Turkish and Persian literary traditions. Hamit’s verses seemed to bear the influence of bold, conceptual European writers of the twentieth century too, so I turned to another poet whose work has similar qualities, who is a huge encourager of new writers, and whom I greatly admire – Neil Rollinson. Coincidentally, Neil has a Turkish flatmate. He returned to the original versions and investigated meaning. He asked for clarification. He exercised the lines. He recommended activating and empowering some English phrases more, and helped calibrate the presentation of words and their possible interpretation. Small adjustments were made, percussions, connotations, equivalents found rather than alternatives. The act of translation became a triangulation between Neil, Hamit and myself. The final English versions have their own agency, as they should, but we believe the verses retain their form and potency, their stories, and, most importantly, their spirit.

Published in Our Small Universe, 2019 Number 1 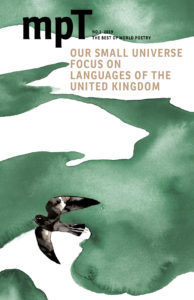