On the lake where willows dream
The swans splash and paddle across
The waters in spring and autumn.
Their necks bend like reeds.

When the frost arrives and echoes
Over things like plate glass
And the surface slowly glazes
With mesmerised whiteness,

Lets the constellations guide them
From the absence of being and freedom
Above oceans of music and symphonic foam.

This poem probably led to the poet’s arrest and subsequent death in the Soviet penal system.

When you stand by the pale blue walls of the Monastery of the Golden Domes and listen to the bells peal, or look out onto the mercurial surface of the Dnipro as it runs through the heart of the city, Kyiv feels an integral part of modern Europe. But beneath the veneer of espressos, German cars, and the superficial lustre of the river there are other histories. To the north east of the city is Bykivnia Forest where the Secret Police murdered a vast number of people in the 1930s. The trees of the forest are adorned with embroidered scarves and the photographs of people who are believed to be buried there. Until the 1990s the Soviet government claimed that, as at Babi Yar, the people buried in Bykivnia were victims of the Nazis. The site was, however, curiously neglected – the poet Vasyl Symonenko was once walking there in the 1960s when he saw some children playing football with a skull. It was not until after the fall of the Soviet Union that the relatives of the victims and witnesses who had seen the trucks arriving to dispose of the bodies could begin to discuss what had happened and the mass graves that are spread across all of Ukraine began to be excavated. Similarly the rural population, and those members of their family who had survived and moved to the city, were able to begin discussing the Holodomor, or genocide famine of 1932-1933.

Rafael Lemkin’s description of how the Soviets sought to destroy Ukraine as a nation by exterminating the peasantry and murdering segments of the population during the 1930s provides an explanation for these events. The country’s literary elite, which was one of the sections of the population targeted by the regime, experienced a wave of arrests and executions and hundreds of Ukrainian writers were executed or rendered inactive by the Soviet Police. Yuri Lavrinenko, the critic who compiled the defining anthology of their work, coined the term ‘The Executed Renaissance’ which neatly expresses the energy of the literary revival they embodied and its brutal curtailment. Three of the authors whose work I have translated in MPT 3/15 Poetry and the State died between 1930 and 1940. Svidzinskyi survived until 1941, perhaps by severely restricting the volume of his published work, but was murdered by the Soviets as the Nazi armies advanced across Ukraine. Mykola Bazhan, a supremely gifted author, became one of the first poets to produce an ode to Stalin. The majority of these writers were not opposed to Soviet power; indeed, many of them had supported the Bolsheviks and were fervent communists. If, however, terror is to be effective in subduing a population it has to be directed against both supporters and opponents of the regime to preclude the possibility of any action, almost indeed any thought, that is not dominated by the state. A network of writers might become a focus for potential opposition and so, although it may consist of authors who wrap themselves in the Hammer and Sickle, it could still present a threat. The Ukrainian language itself, which after centuries of repression became the vehicle of a renaissance because, ironically, the Bolsheviks were encouraging its use in order to secure the loyalty of the indigenous population, became a threat simply in that it meant the Soviets were not in absolute control of Ukrainian literary life. The murder of many of these authors and the transformation of their surviving colleagues into the cheerleaders of mass murder were part of a process designed to erode the cultural identity of the Republic and transform its citizens into Homo Sovieticus.

The names of many of these writers were erased from the record and their works were banned. They had remade the Ukrainian language which, having been excluded from public life and its use restricted under a decree pronounced by the Tsar in 1876, now took on the full array of European literary forms. But so strengthening their language, they eroded the party’s control over the literary and cultural landscape, they weakened the power of what Kaganovich described as the ‘highest achievement’ of Russian culture: Marxist-Leninism.

The work of these authors is an affirmation of the ability of human beings to confront and transcend the most terrible circumstances and demonstrates how language and the imagination cannot ultimately be curtailed by any regime however brutal.

Published in Series 3 No.15 - Poetry and the State 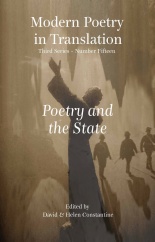