In Rome at the New Year it is the custom to throw old things into the street.

Rome rattles and shakes
like a runaway breakdown truck.
All over Rome and round about
the New Year’s coming in!

Like Mills bombs, bottles
dropped from windowsills.
crash all over the place,
and what price that tough
shoving a bathtub onto a balcony?

Up on the Piazza di Spagna,
spinning like a flying saucer,
a husband is flung from his nuptial bed:
he’s obsolete and all but dead!

They’ve cornered a naked man in a bar,
‘Damn you squares!’, he bawls,
‘I need a change of suit:
last year’s is out of date’.

Dear town, we shall flounder and drown
In your cast-offs and metamorphoses;
your ancient asphalted roadways
gleam like the sloughed skins of pythons.
All the times you have shuffled them off,
but the speedometers show they’re still too slow
for Roman girls on Vespas!
So what next do you have in store for us?

The human race with roars and guffaws
is ridding itself of its rubbish,
do we all need overhauls?
Like Time itself we approach our hour

and stand, forgetting petty chores,
fully absorbed now by the future.
Do we regret what we’re discarding?
A reindeer’s dam, just after fawning,
looks loving and a little overcome.

Maybe the New Year will be rough,
with a few good days for flying in it?
Don’t worry: it won’t be the end of the world
– and the more fun we’ll have saying goodbye to it.

We fly through the air like apples off branches.
This fuss is already rather a bore,
though later, at least, I have something to live for:
– towards the middle of the windy day,
in her lopsided winter villa she’ll say
(once she’s gallopped through that thriller)
that she’s cold when I’m not with her,
she’s cold without me is what she’ll say…

And past other worlds
into darkness, deadpan as a croupier,
our pale planet whirls –
cooped in its shell like an embryo bird.
It’s hatching out now, look!
What to become? A warbler?
Or a black thing, a baby rook
blasted off the wing by atomic warheads?

I only hope the weather keeps fine
for all these darling creatures…
Over Rome – and all the world what’s more –
the New Year’s coming in…
…with tangerines and amorous passes,
and right till dawn the women’s bodies
– like electric bulbs in lampshades –
glowing through their dresses. 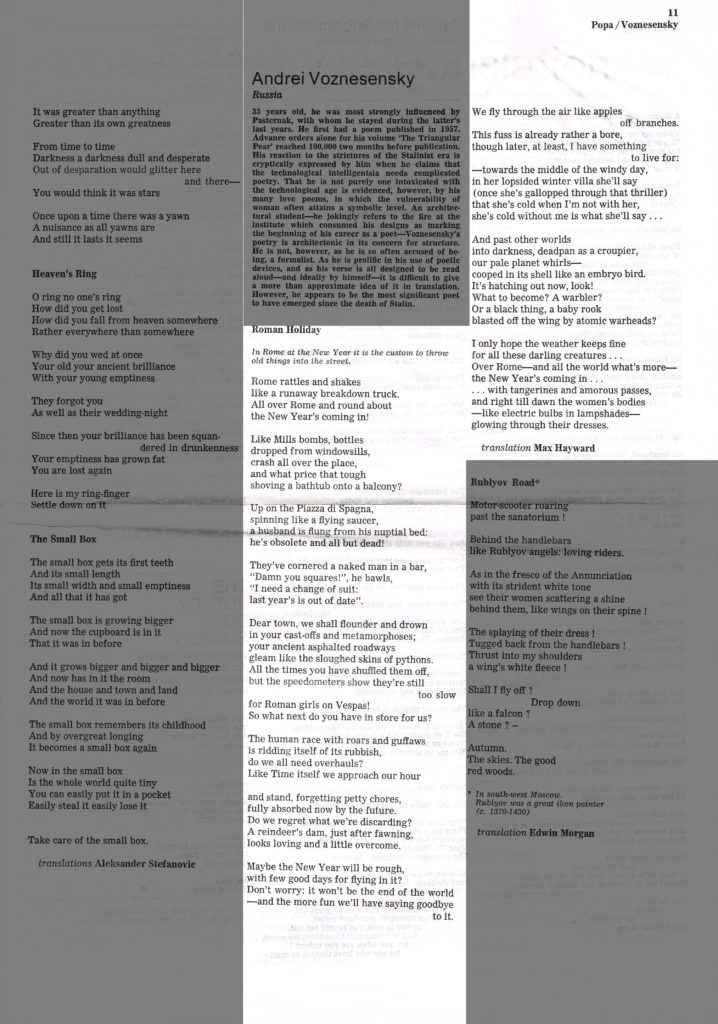