Unsleeping eyes which do not only see
Wallpaper patterns and the morning’s stain
Can read a future summer’s history
Painstakingly hand-written by the rain –
For each leaf’s destiny a single line
Attests to form: each drop’s semantics dream
The future garden’s shape, or the design
Of empty skies which sparkle, skies which scream.

The dreadful blessing of a waking night
Is felt when patience unbraids, from inside,
The eyes, then shifts the broadened roots of sight
To form new roads where new images ride –
A star is bursting into blooms of sea,
And in a glass of water, silence glitters,
Time after time your pasts keep breaking free,
No sea could taste as beautiful, as bitter.

Insomnia brings a fresh sleep into play:
Your waking self works on another plane –
Made in the old day’s image, the new day
Has grown a shadow, so is not in vain;
You take your coat, your keyturn still ignites
The engine – acts exact but other-led –
Polysemy sings at the traffic lights,
Weaves a new fabric with three hues of thread…

All those who feel by night that time’s unsure
Will give a different structure to their day,
From hour to hour; bound by its simple law,
They ask ‘Is there a structure anyway?’
Insomnia spawns another sort of sleep:
The waking state which recreates you teems
With this new sleep, just as rainwaters seep
Through desert sands. And in it, freedom gleams –

For those who stay awake, nights are elsewhere,
A star is bursting into blooms of sea,
Primeval forests, choking, drink the air
And water of a summer still to be;
Last image: sleepless eyes, just like a rear-
View mirror filled with road as it’s unrolled
To nothing, glimpse at Eden as they peer
Into the final sleeplessness, the fold.

The Room of Darkness

Published in A Blossom Shroud, 2017 Number 2 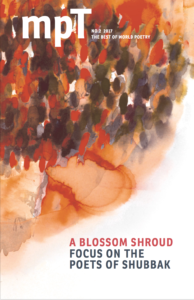