It’s the last day of the old raven.
His turn has come and soon a pall
Of darkness will cover him up. But for now
He suspects nothing at all
As he plods along over virgin snow
Like a peasant, flits up and alights
On a bush, shakes the ice
From a branch, rubs his beak on his claw…
From behind the blue mountain a moon is emerging,
Colder, more vast than ever was seen hitherto,
As though slowly a door were opening
To let the old raven pass through.

It is perhaps easy to underestimate the work of Serbian poet Desanka Maksimović as little more than an agreeable, but fundamentally unchallenging, evocation of the natural world. And, indeed, her work attracted criticism during the late twenties and early thirties from the group of left-leaning avant-garde poets known collectively as the New Modernists, who objected to what they saw as her traditional poetics and lack of political commitment.

However, on closer acquaintance her best poems can be seen to be informed by a gentle scepticism which calls into question the orthodox materialism and rationalism of Western civilization in the twentieth century. This scepticism is reflected in the shifting, unstable thought patterns of her poems, whereby a seemingly unproblematic opening statement is subtly reversed in the course of the poem’s development. Such a movement will typically involve the passage from a straightforward description to the evocation of a more enigmatic reality which the poet claims to glimpse beyond appearances.

And yet Maksimović is a quiet rebel who prefers to undermine from within, instead of staging a frontal assault from the outside. These translations attempt to convey this quietly subversive quality of her poetry, with its undemonstrative vocabulary and suggestive rhymes and rhythms.

Before the Birth of Toys 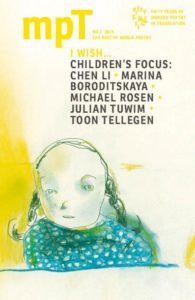