The sound of folding irritated my ears
I covered my ears
I tried to fold while covering my ears but failed
I had to make a choice:
Cover my ears or fold paper
I decided to fold
And started folding again

One day you wake up and realise how this world is already made so well and so stably. It makes you sad and angry and irritated at the same time, letting you know that there’s almost nothing left that you can change or make anew. There is a Japanese culture called ‘Origami’, with which you can create almost anything from one square of colourful paper. ‘Dazzled by the Morning Light…’ is a poem using this motif – the hands hope to create their own world, struggling with so much noise surrounding them.

This poem was first published in the May 2007 issue of Gendai Shitecho magazine. Osaki appeared in the Japanese poetry world for the very first time with this poem before she started to focus more on listening to nature and animal voices after the Great East Japan Earthquake in 2011. The simple and easy manual work of folding various things with origami tamed her feeling of irritation caused by the vulnerability of self-existence. 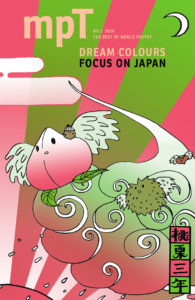