I Wanted to Ask You, Salome Benidze, translated by Helen Mort and Natalia Bukia-Peters, the Poetry Translation Centre, 2018. 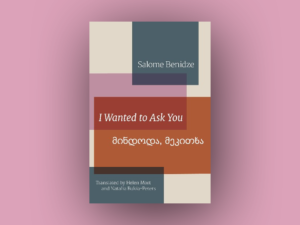 Beginning to read Salome Benidze’s pamphlet I Wanted to Ask You, (translated by Helen Mort and Natalia Bukia-Peters), I found it subdued, cautious, picking its way along well-trodden paths without trying to cause a fuss. The almost-title poem of ‘I Wanted to Ask’, is charming in its sincerity, but trips over itself in the awkwardly phrased ‘Don’t come back! / Don’t meet me! / Don’t call me any more!’

In ‘Three Summer Letters’, the translation dips in and out of the original rhyme scheme for no apparent reason. The first two letters follow an approximation of the original’s form, albeit absent-mindedly switching from ABCB to ABCA in the second stanza of the first letter, but the third letter abandons the rhyme scheme altogether. Line length is similarly irregular, with some particularly unsatisfying instances of imbalance:

The taste of salt, the sun’s path through the sky
the parasols and boundless sea
are artist’s impressions
of what love could be

The reader might think that this is an attempt to conserve as much of both the original form and content of the Georgian as possible. However, this is not always the case. Here is the second stanza of the second letter:

It was morning and the sun slept with me.
Morning, and the moon’s ghost was our guard.
Your absence was a pale sadness,
darker than ice but just as hard.

A pale sadness that is also dark, and darker than ice at that, is strange anyway, but it also bears no resemblance to the original. Here’s my literal translation of those last two lines:

It seems that the only purpose of this change is to rhyme with ‘guard’.

‘The Story of Those Without Motherland’ is much more interesting, and here the collection gathers energy. What starts as a didactic and patriotic poem turns into a more nuanced take on nostalgia for one’s homeland. At first we are told that ‘the happiest death is | death in the mountains of your country | and the worst is death under a different flag’, but then comes the admission that ‘I have never had a home | and the torrent from the mountain sweeping down the street | is just tears | which I saved for my stepmother’. ‘[M]y land […] did not accept me: | it buried me | and when I lay too heavily | it spat me out’ – by the end of this longer poem, the opening delusions have all been seen through, and the bitterness is palpable.

The highlight of the collection is ‘The Story of Flying’, a coming-of-age poem, achingly beautiful, about girls as they are and how they fly when they are in love.

They don’t need to hide their wings
because there’s nothing to hide.
They are as simple as crocuses.
Walking down the street,
they don’t give telltale glances at the sky
because they know well
that earth is sometimes more important.
Their faces don’t launch a thousand ships.
They are most lovely
when they fly,
aimless and blind.

The poem is a love letter to girls, who ‘don’t even understand how they rise, | high, towards the full moon’, who have magic and power and yet sometimes crash on the rocks, following the ‘one simple rule: not all flights are for survival.’ The male friend in the poem does not understand this rule, wants everything to be wrapped up neatly – he believes in ‘the power of safety regulations | the power of happy endings’. Still, Benidze’s girls and women seem fragile things that hang on threads of love, and crash when the threads are broken.

The last poem, ‘My Soldier Husband’, though, does go some way to rebutting this – it begins with the narrator listless in the absence of her husband, ‘sometimes think[ing] I’m destroyed beyond recognition’, but by the end she is calling to her husband back from war with powerful, sometimes gruesome invocations:

Come in.  Your greatcoat is smeared with blood,
I love it like I love the smell of your rough skin.
Sleep calmly, I will guard you all night,
I will fold your sleeping sighs into handkerchiefs
and keep them hidden in my pockets

Adham Smart is a writer and translator from London. He was featured in The Salt Book of Younger Poets, and contributed as translator to Six Georgian Poets (Arc Publications). His first book of poetry, yes yes mouth (Valley Press), and his first full-length translation from Georgian, All the World’s Mysteries by David Dephy (MadHat Press), are both forthcoming.