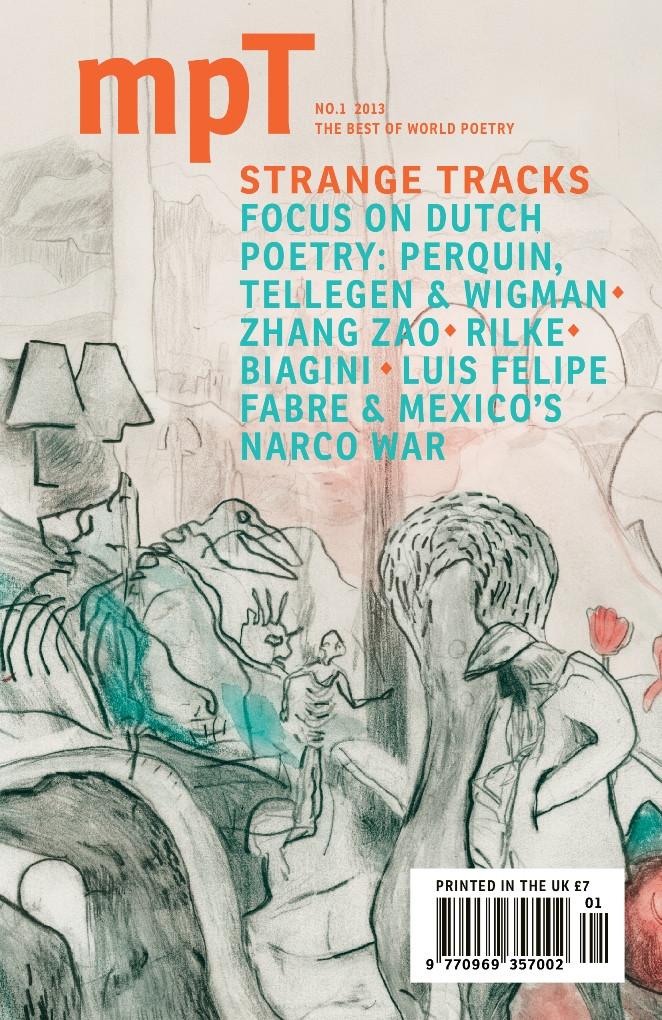 Modern Poetry in Translation (MPT) has had a radical change of image. We have been working with Katy Mawhood at Reading University’s Department of Typography to produce a magazine that both refers back to the iconic designs by Richard Hollis in the 1960s and 1970s, and is contemporary and fresh in look and feel. You may like to read her thoughts on the design of MPT inside this issue. The cover of each issue will be illustrated by an international artist. This Spring Perienne Christian has responded to poems in the issue by celebrated Dutch poet Toon Tellegen to produce an extraordinary and unsettling piece of cover art ‘Transmogrification’.  We have returned to the original bible paper and simplicity of typeface.

MPT will now appear three times a year, rather than two, although subscriptions will remain at the same price. It will be distributed more widely into bookshops and galleries, and it will now be sold for the first time as an e-book (from May).

The spirit of MPT is unaltered: we publish the best world poetry in the best translation.  Our Spring issue ‘Strange Tracks’ features new poems from Argentina, Venezuela, China and Italy, poems about the casualties of the Mexican drug wars by Luis Felipe Fabre and Valérie Rouzeau’s Apollinaire Prize-winning poems in Susan Wicks’ translations.

A new translation of Baudelaire’s ‘Le Voyage’ by Australian poet Jan Owen and a reworking of Bertrand’s ‘Gaspard de la Nuit’ by Stuart Henson demonstrate our continuing belief in the modernity of new translations of classic poetry.

Each new issue of MPT will have a special focus, and this Spring we celebrate the extraordinary renaissance of poetry in the Netherlands with poems by Popescu winner Toon Tellegen, 2012 VSB Poetry Prize winner Ester Perquin, and Menno Wigman. The focus includes an interview with Tellegen and his translator Judith Wilkinson.  Alongside Valérie Rouzeau they will help us launch the new MPT at the Brighton Festival on 4th May.

ELISA BIAGINI, poems from The Guest
Translated by DIANA THOW and SARAH STICKNEY

FRANCES LEVISTON, ‘Reconstruction’
After the Old English poem ‘The Ruin’

STUART HENSON, ‘The Builder’
After the prose poem ‘Le Maçon’ by ALOYSIUS BERTRAND

EDUARDO CHIRINOS, poems from While the Wolf is Around
Translated by G. J. RACZ

TUVIA RUEBNER, ‘Testimony’ and other poems
Translated by RACHEL TZVIA BACK

MENNO WIGMAN, ‘Room 421’ and other poems
Translated by DAVID COLMER

TOON TELLEGEN, poems from There are Words for that: Selected Poems
Translated by JUDITH WILKINSON

KATHRYN MARIS, An Iraqi ‘Waste Land’
A review of FAWZI KARIM’s Plague Lands and Other Poems

JUSTIN HILL, Chronicles of a Lordlordland
A review of a groundbreaking new anthology of Chinese Poetry

KATY MAWHOOD, Thoughts on the design of MPT

READ POEMS FROM THIS ISSUE ONLINE (15)

The Sun, Which Can Do Everything Translated by G.J. Racz

God in the Middle Ages Translated by Cameron Hawke Smith

18 Lines towards What Translated by Susan Wicks

Summer Translated by Rachel Tzvia Back