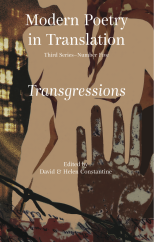 ‘Transgressions’ is a rich and rewarding issue which begins with the editors’ definition of what transgression might mean to a translator: ‘the word might allude to fidelity and infidelity; to the foreignness of the thing they are bringing in from abroad, the blatancy of its foreignness, or the homeliness and familiarity in which they disguise it’.

It includes a satisfyingly varied mix of eminent writers, poets and translators ranging from poet and translator Michael Hamburger, through young specialist in modern Chinese poetry, Zhou Zhan, to distinguished poet and translator Clive Wilmer, who with George Gömöri has translated five volumes from Hungarian. Other writers include Pascale Petit, who brings exotic myth to family relationships; John Manson who translates Cavafy via French into Scots; and Dorothea Grünzweig, living in Finland, who has put the songs of the Mansi into German.

The work collected here, the editors suggest, often offends, or discusses offences, against one code or another. Transgressions is a subject we should do well to consider, when the kinds of transgression are so often done by governments in the name of the people. The introduction ends on a simultaneously sobering and inspirational note:

‘If writers can show us the real transgressors, the very big pornographers, the mouthers of the worst obscenities, and help us to resist them, they will do well.’