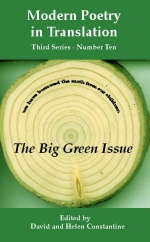 Migration at the very first stirring my airtight, upright sarcophagus breaks into pieces, each fragment starting to turn green even as it falls … Martii Hynynen, translated from the Finnish by Mike Horwood

Modern Poetry in Translation, Third Series, No. 10 is dedicated to the beauty, abundance and plight of Mother Earth. This autumn MPT will be truly internationalist. Work from all quarters, out of as many languages as possible, will demonstrate an obvious fact: on Planet Earth we sink or swim together. The arguments will be polemical, saying the things that must be said, but also celebratory, so that we see, yet again, what it is we risk losing. Poetry, translated and original, essays, anecdotes, photographs, and illustrations, all of the highest quality, show up wrong attitudes and the deeds they encourage; but also indicate how we might live better in the living world.

READ POEMS FROM THIS ISSUE ONLINE (6)

The unhomely Translated by the poet

The violets are children with bare feet Translated by Allen Prowle

In search of fat Translated by Chris Beckett