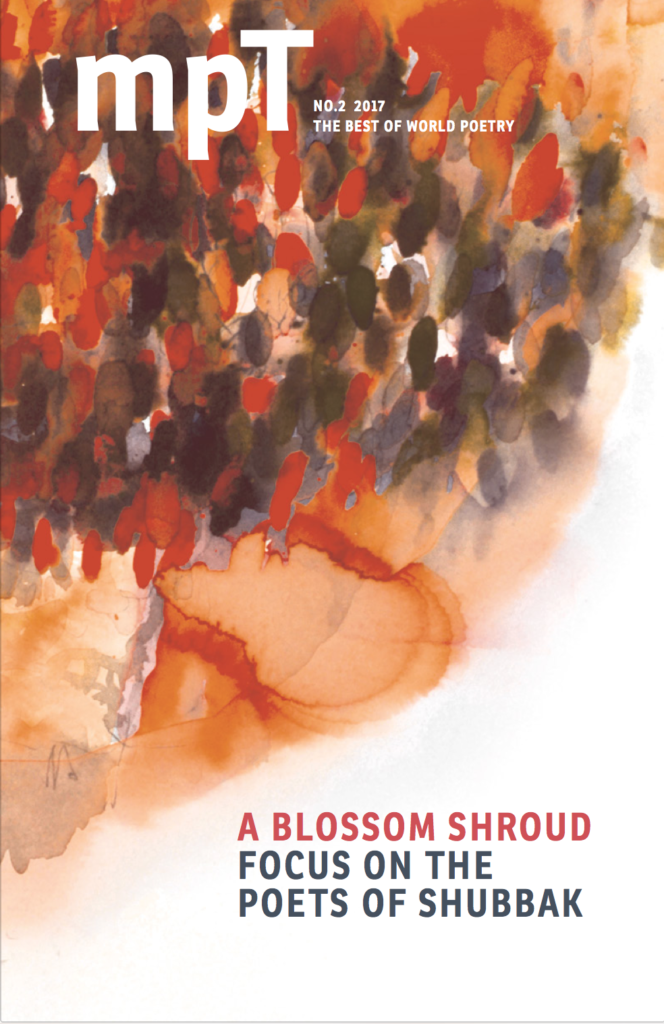 MPT’s summer issue ‘A Blossom Shroud’ focuses on poets and translators associated with this year’s Shubbak festival of Arab Culture in London and it publishes a selection of new translations of poets appearing at the festival: Mona Kareem, Dunya Mikhail, and a new long sequence of poems by Golan Haji, translated by Stephen Watts. The focus also includes a conversation between Alice Guthrie, Shubbak’s literary producer, and poet, translator and activist Mona Kareem, who has led the campaign to get Palestinian poet Ashraf Fayadh freed from a charge of apostasy in Saudi Arabia. Also featured are new translations of Hisham Bustani, Najwan Darwish and Syrian actor and activist Fadwa Souleiman. This stunning work from the Arab world appears alongside documentary poems by Chinese poet Shen Haobo on the AIDS villages of China, new translations of Rilke’s French poetry by Paul Batchelor, poet Katrina Naomi’s translations of Mexican poet Yohanna Jaramillo and Golan Haji’s selection of the Kurdish poets we should all be reading. All in this new issue of the groundbreaking magazine dedicated to poetry in translation: for the best in world poetry read MPT.

‘It Rains from Heaven and Earth’: Five Arabic and Kurdish poets Introduced by Golan Haji

Alice Guthrie and Mona Kareem
The Great Spirits of Translation: a conversation

Focus on the poets of Shubbak

A new sequence of poems by Golan Haji

Chinese poet Shen Haobo on the AIDS villages of China

READ POEMS FROM THIS ISSUE ONLINE (10)

The End of Days Translated by the poet

The Room of Darkness Translated by Robin Moger

In Praise of Sleeplessness Translated by Francis R. Jones

Tablets III Translated by the poet

The End of Days

The Room of Darkness

In Praise of Sleeplessness