Translation and introduction by Alexandra Berlina

On May 24th, 2020, Joseph Brodsky would have turned 80. He would have been in the riskiest of risk groups, what with his heavy smoking and a history of heart attacks. But he has nothing to fear anymore, not for decades. And still: we know what he would have looked like wearing a face mask. 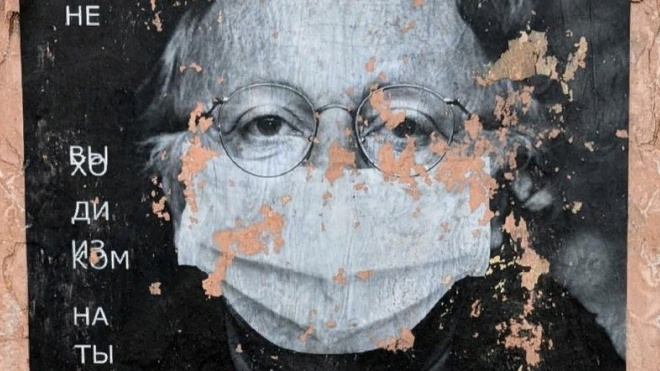 This piece of street art appeared in St. Petersburg this April; the Russian-speaking internet abounds with similar pictures. This is because fifty years ago, in 1970 – or perhaps in 1969 – Brodsky wrote a poem that bears no title and is known by its first line: ‘Don’t leave your room’ (or ‘the room’, the Russian allowing for both readings). Today, it seems prophetic – or particularly poignant, or wittily ironic, depending on how you read it.

And the readings are many. One might take the poem as an expression of solipsism, be it as a philosophical position or a symptom of disappointment and depression. One might regard it as an appeal for ‘inner emigration’, a serious admonition to extreme privacy, or as precisely the opposite – a sarcastic proposal implying that one should actually go out and do things, perhaps even fight the system. The appeal for privacy as a way not to turn into a herd animal is in line with many of Brodsky’s essays; ‘Don’t leave your room…’ would thus tie in with other admonishing poems such as ‘When you travel in Asia.’ The suggestion of sarcasm seems less justified, as so much in the poem is autobiographical: Brodsky did have an intimate relationship with solitude, furniture and the bossa nova (translated as ‘samba’ in my version). More probably, as head of the Brodsky Estate Ann Kjellberg suggests, it could be something in-between: a tongue-in-cheek poem, an affectionate riposte to Brodsky’s friends who were always telling him to stay out of mischief: after all, by 1970, he had been in deep trouble with the KGB, which would soon result in his expulsion.

What we can say with any degree of certainty is, as Igor Pilshchikov argues, that the poem does actually have something to do with a pandemic. The Hong Kong flu killed several million people across the world between 1968 and 1969. ‘Don’t leave your room…’ surfaced only in the 1990s (probably someone brought it from Russia when travel became possible), and Brodsky dated it by memory. Pilshchikov suggests, based on parallels to other poems, that it might well have been written in 1969 – and 1970, too, is close enough. This is not to say that Brodsky was writing quarantine instructions, but the pandemic must have been on his mind to some degree when he chose ‘virus’ as the final word of the poem – the only tangible, if microscopic, component in a list of dangers, a typically Brodskyan anti-culmination. References to the pandemic also appeared elsewhere in contemporary Russian poetry, such as in Andrei Voznesensky’s ‘Hong Kong ‘69 flu’. While the chronos and the cosmos probably seemed more dangerous to Brodsky than any virus, his ‘isolation poem’ is as close to us as it could be, something to recite while keeping safe or getting better. After all, there is nothing like a Brodsky poem for therapeutic recitation.

Don’t leave your room. This is better left undone.
You’ve got cheap smokes, so why should you need the sun?
Nothing makes sense outside, happiness least of all.
You may go to the loo but avoid the hall.

Don’t leave your room. Don’t think of calling a taxi.
Space consists of the hall and ends at the door; its axis
bends when the meter’s on. If your tootsie comes in – before
she starts blabbing, undressing – throw her out of the door.

Don’t leave your room. Pretend a cold in the head.
What could be more exciting than wallpaper, chair and bed?
Why leave a room to which you will come back later,
unchanged at best, more probably mutilated?

Don’t leave your room. There might be a jazzy number
on the radio. Nude but for shoes and coat, dance a samba.
Cabbage smell in the hall fills every nook and cranny.
You wrote so many words; one more would be one too many.

Don’t ever leave your room. Let nobody but the room
know what you look like. Incognito ergo sum,
as substance informed its form when it felt despair.
Don’t leave the room! You know, it’s not France out there.

Don’t be an imbecile! Be what the others couldn’t be.
Don’t leave the room! Let furniture keep you company,
vanish, merge with the wall, barricade your iris
from the chronos, the eros, the cosmos, the virus.

(first published in the 1990s: first in the Novy Mir magazine, then in the last collection Brodsky edited himself: Peizazh s navodnenium: Landscape with a Flood)

A note on the translation:

‘Informed its form’ is both a fairly literal translation and (a rather unsatisfactory) substitute for a lost pun: the original second line says ‘Why should you need the sun (solntse) if you smoke Shipka?’ Both Solntse and Shipka were brands of Bulgarian cigarettes. I decided against attempts along the lines of ‘You read The Guardian, why should you need the sun?’, Brodsky being a Russian chain smoker rather than a British liberal.