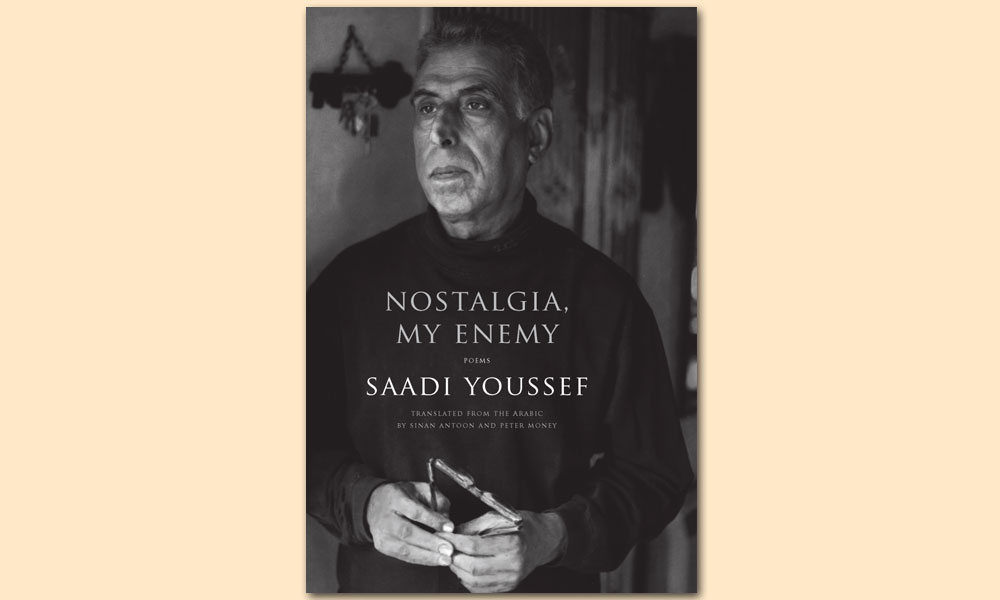 Saadi Youssef published his debut collection in 1952. In a little more than half a century, he produced forty-six collections, which gradually cemented his position as one of the greatest contemporary Arabic poets. Since then, Youssef’s poetry has been hailed as poets’ poetry and also every man’s (or woman’s) poetry in its poignant simplicity, mirroring his desire for poetry to be ‘the bread of all people.’ When Mahmoud Darwish, a Palestinian poet who was also a pillar of Arabic poetry, was asked about his dry spells he repeatedly said: ‘as long as Saadi is writing I feel he is writing on my behalf.’

Youssef’s political views resulted in his recurring exile, and led him to London, where he now lives. His poetry is mostly autobiographical, thus inevitably entangled with his political views and his turbulent country. Nostalgia, My Enemy is a translated collection of the Iraqi poet’s best work, focusing on the latest phase of his poetry.

An Irish Rose,
How will it be in Basra, then?
How in London, and not in Dublin?

Although the majority were written in London, the poems do not always derive their imagery from their setting. They often nostalgically and lamentingly gather their metaphors from Iraq, and its indigenous birds and trees.

These elements are used for a wide variety of concepts. For instance, birds are metaphors for hope, demons, and waiting. Similarly, trees are metaphors for alienation, prosperity, dignity, uprooting, death, companions of the dead, messengers, permanence, visibility, and instability. The reliance on indigenous birds and trees to allude to such an expansive multitude emphasises the importance of homeland in the collection.

Since almost all the poems in the book were written after the 2003 American invasion of Iraq, they ponder from a haunting distance the Iraq in Youssef’s memory, as well as the Iraq under duress that lacks any semblance to the long-gone homeland. From beseeching God to grant him wings so he may escape the rock he is tied to, to his refusal to speak to the country that ‘uprooted the meaning of branches’ from his garden, the collection’s imagery is inextricable from displacement.

Peace be upon Iraq’s hills, its two rivers, the bank and the bend,
upon the palm trees
and the English hamlet gently dragging its clouds

The first sentence, which quotes a famous opening line of a poem by Muhammed Mahdi Al-Jawahiri about the Iraqi landscape, is repeated in the poem until it gradually dwindles to ‘peace be.’ Youssef interrupts it with jarring contrasts between the imagery of Iraq and that of his place of exile to emphasise the revocation of his homeland: ‘can you see the impossible – frond?’

This layered displacement and isolation, which looms over the collection, renders Saadi’s life a journey with no destination. Throughout the ‘journey,’ his dedications and references are to family members that exile has separated him from, or to exiled historical figures (Imru’ al-Qays’ grandson, and Abdelrahman Munif). As such, his poems are written on behalf of the countless others who yearn for an unreachable homeland and are taunted by the painful fact that, in Mahmoud Darwish’s words, ‘my homeland is not a suitcase.’

Now leave your seat and get off this train,
my train will speed past after this station
-so get off
and let me go
where no train will ever stop.

This dichotomy of journey versus destination is prevalent throughout the collection. In the title poem, he acknowledges how nostalgia is chasing him on the train of life and attempts to dispel it so he may seek telos in the endless journey. In other poems, Youssef manages to find the poetic in the mundane stagnation of every day; in ashtrays, gas and electricity bills and falling paint.

Yet he questions his complicity in the exile that renders his life into an endless journey: ‘did I know my face would be wandering these roads after you?’ This tension between this cursed dichotomy is also apparent in ‘Four Sections on Place’ when, in London, every morning he ‘struggles to know’ his surrounding trees ‘by touch’ and every evening he ‘rise(s) to the North Star and calls.’

Eventually, desperation seeps in, and he yearns for an end. He repeatedly fantasises about death, as it signifies a destination: ‘leaving this game forever.’ In a few of the poems, he uses the imagery of the trumpet of resurrection that a day ‘calm as death’ may bring. In others, he describes his hope of reuniting with his father, his son, and the Iraq in his memory:

So wait for me, O son,
we will meet
where the fog is blue
in the morning.

This verse is from a poem written about his son, who died of a heart attack in Japan at the age of thirty. ‘Where the fog is blue’ is referring to Abu Al-Khaseeb, the city where Youssef was born. Again, despite its hopefulness, it eludes to an unnamed destination, one where a rendezvous with the deceased is possible.

This speculative pursuit of an end brings a sense of perverse optimism to the collection, which otherwise relishes quotidian banalities. As Youssef puts it in the prologue, ‘poetry is transformative,’ and he seeks to turn his situation into some form of a heaven; to escape the stagnation of the moment: ‘as if the sky is a beginning.’

Our cells were open yesterday.
We were lifeless on their floor,
and you did not come, O Lord.

But we are on the way to you.
We will remain on the way even if you let us down.
We are your dead sons and have declared our resurrection.
Tell your prophets to open the gates of cells and paradises!

Inanimate objects mobilise simply because they are ‘sick of him’: the ship sets sail on the wall, the bird pecks at the singer’s head on a CD cover. Despite God’s refusal to budge, this incarcerated Youssef will reach heaven.

This mixture of morbidity and hopefulness defines the collection’s pursuit of a destination. Youssef manages to find refuge in the impermanence of a nomadic life, because ‘this moment is enough.’ The collection finds a place in displacement, as transformative poetry should.

Shahd Hisham is an Egyptian urbanist, writer, and journalist based in London. She currently translates Arabic and English as she works on her debut novel with the central theme of a rift in languages and identities.