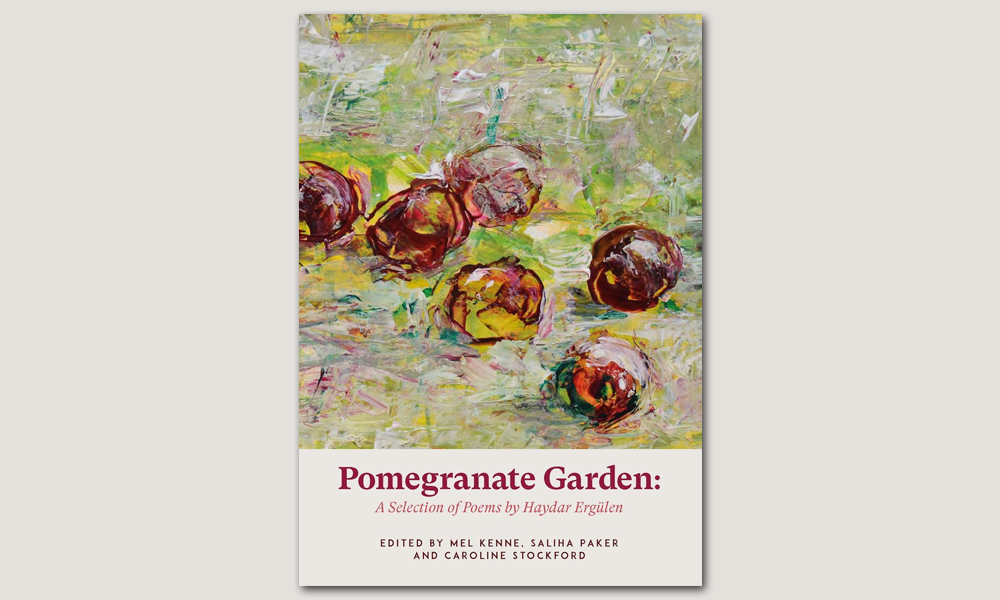 Haydar Ergülen is the most prominent of a group of poets that emerged during the 1980s in Turkey, an era woefully underrepresented in translation. Drawing on some forty years of work, this selection of nearly eighty poems is the first volume of his work – and the first major work of his generation – to appear in English.

A poet of deep affections, this selection highlights Ergülen’s love poems, his summer poems, his nostalgias, his constant connection to the sprawling ecosystem of Turkish letters. In his sweeping familiarity with the numerous poets he mentions by name, we catch a glimpse of a poetic tradition largely unavailable to English-language readers. Often considered something of a poet’s poet, he sees poetry in every small moment, and turns it into mystery:

The pomegranate is a recurring and fitting image for Ergülen, of the one that is many – it’s also the name of his daughter. This selection is a sort of map of his affective relationships, with his wife, his daughter, his mother and grandmother regularly appearing. His long autobiographical poem, ‘On Things That Are Falling Asleep’ (translated by İdil Karacadağ) is especially noteworthy, not only because it’s all too rare to see long Turkish poems in English, but for lines such as these that mingle poetry and politics to complicate our narratives of nationalism and identity:

Everybody keeps going on about Turkey in their poetry so here’s a version from me:
white Turkey, black Turkey, green Turkey and there’s the Kızılbaş too
their Turkey is inner Turkey, poetry leads onto a street called Turkey or something
I haven’t even left my house yet, much less poetry, I’ve not even looked
out of the window – be careful, what if Turkey sees you!

Ergülen has a reputation for being prolific – his collected poems appeared in 2000, and since then he has published at least seven more award-winning books. He’s also formally diverse and inventive, writing in traditional forms, such as the ghazal and the Alevi-Bektashi nefes, as well as under multiple noms de plume, in book-length poems, in tiny capsule poems, and shaggy blocks that amount to lyric prose. Rather than giving us all this in a regimented sequence of drips and drops, the editors present a coherent vision of his work by pooling it into five manageable sections.

Most of the team of ten translators are alumni of the Cunda translation collective, a group that has carried several other Turkish poets, such as Gülten Akın and Behçet Necatigil, into English. This collection continues their work and, in a warm and engaging book, fills a long-neglected gap for readers of Turkish and world poetry.

Derick Mattern is a translator of contemporary Turkish poetry and a PhD student at Washington University in St Louis.