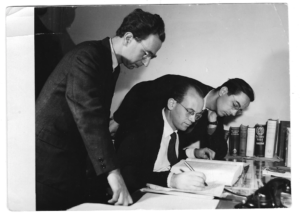 George Theiner (middle) and his colleagues at work in the 1960s

George (Jiří) Theiner (1926-1988) was born in Czechoslovakia and came to London at the age of 11 to escape the Nazis. In 1945 he returned to Czechoslovakia, where he worked on literary magazines, but his refusal to join the Communist party led to him being forced to work in the Silesian coal mines as part of a forced labour unit.


After the Soviet invasion in 1968 he returned to England with his family and devoted his life to translating and promoting Czech literature. He worked as assistant editor and then editor of Index on Censorship and translated many great Czech writers, including Miroslav Holub and Václav Havel. He was a frequent contributor and good friend to Modern Poetry in Translation. His correspondence with Daniel Weissbort around the time of the Soviet invasion, when he is fleeing Czechoslovakia with his wife and family, is particularly moving.
Theiner wrote on several occasions about the Czech literary scene and its repression. In a short piece published after the Soviet invasion called ‘Helping those who have been silenced’ he wrote:

Since the political and cultural clampdown which followed the invasion of Czechoslovakia in 1968, all but a handful of the country’s major writers have been prevented from publishing. They are not allowed to work on newspapers and periodicals (the leading magazines such as Literární listy, Host do domu and Tvář were in any case banned in 1969), their novels, stories and poems are not published, their plays not performed, they have been forbidden access to the theatres, film studios and universities. In true Orwellian style, the Husak regime has converted them into unpersons.

George Theiner’s contribution to Czech literature is marked in the Czech Republic today by a Jiří Theiner Prize, awarded every year at the Prague Book Fair to people and organisations contributing to the profile of Czech literature around the world.