Look, the spirits have gathered at your bedside
Speaking in Lethean tongues
Hush-a-bye, so flesh and fine,
For what do you long?

I smiled
He said, Marusya,
Marusya, hold on tight. And down
We went

No vember
the cruellest month, the hoarsest mouth
driving from the dead clay
peasants forged to the field,
cows, curs, leaving over their dead body
the postbag snagged in the stream
the tin spoon
the quick streams slipping the quicksilver
slip sliding away to the estuary

The Greek in Odessa, the Jew in Warsaw
The callow young cavalryman
The Soviet schoolboy
Gastello the pilot
And all those who died in this land

out of the murky pool, the surface still warmed by the sun
in a night in may, steps rus al ka and quickly begins her work
throws her wet clothes from her tramples with her wet feet
her black body shines her white smock cast

mother, mother is that you? alyosha I don’t rightly know

o swallow, swallow, is it her? she flew away, my friend

Published in War of the Beasts and the Animals, 2017 Number 3 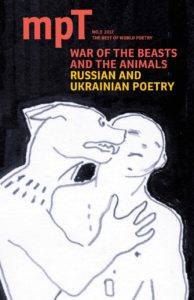