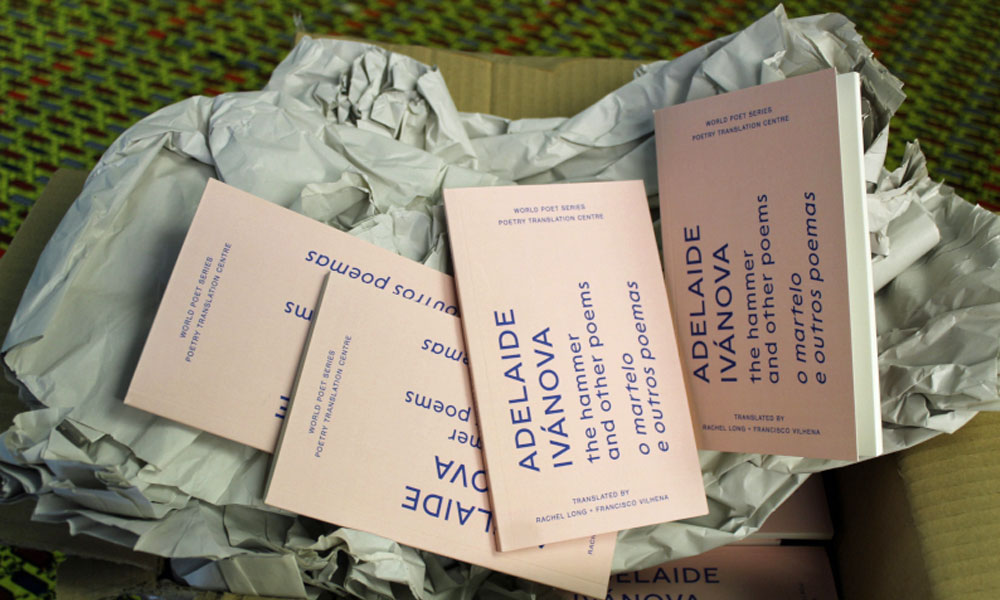 The Hammer and Other Poems by Adelaide Ivánova, translated by Rachel Long and Francisco Vilhena. Image: the PTC

How to consider the body after sexual trauma? Ivánova sings of bodily fragmentations and argues that these ruptures are the only way of representing the whole body in an unjust system. The hammer, in poems that frame the pamphlet, is both judgment and weapon, is language and physics, is inevitable and not: a tool of interrogation and resistance. And so, Ivánova cleaves her pamphlet into two – half explores the tensions between due process and the post-rape experience, the other, the relationship between an explosive expression of female sexuality and the trauma itself.

Rachel Long and Francisco Vilhena offer exacting, lyrical translations. ‘Guilty is the woman,’ we, who have forgotten ‘what is in fact the sentence,’ are reminded; Ivánova is quick to show us, in the second poem of the pamphlet, that only the ‘ending’ is ‘certain’ when we pit the word of a man against the word of a woman. It seems easy for some to dismiss such criticisms of the justice system as being too sensitive, too unnecessary for ‘the West’ (whatever that means). But we only have to look at Dr Blasey-Ford, E. Jean Carroll, or a recent rape trial in Cork, Ireland, to see that the ‘obvious pardon’ because he is ‘only a man, not a monster!’ still rings true everywhere. Ivánova adds further, intersectional examples to this list of men pardoned either by law or attitude, in ‘for laura’: Matthew Shepard, and Laura herself, who are killed by monster-men.

Ivánova has a keen ear for all the subtlety of other social contracts, too. She is ruthless in her dissection of norms, powerfully rendered by Long and Vilhena in ‘the testicles’ as the fact that ‘if they think of | rape as sex it’s because they have | no idea like i do of | what a good fuck is.’ She reduces marriage to a ‘mattress’ filled with all sorts of Biblical and classical plagues in ‘the visit’. She breaks language itself when it doesn’t do the necessary work, exposing the expectations underneath: the lines declaring that ‘if there are 2 in the mattress | of 1 visitor there will always be one who is not | innocent’ wrap and warp layers of meaning and representation, intertwining infidelity with the idea of the woman who is always considered guilty. There is also something unyielding in the dislocated language of her lists, especially those in ‘the married woman’, which seem to define an inner life separate to the ‘little things | sex | bikini | razors | travel | the olives | the napkins | the eggs’. These things are not what make the speaker a woman; rather, they render her ‘animal’ and ‘flesh’ and object in the next poem; they turn her into a drawing of a woman; they make her angry.

This brings us back, full circle, to the hammer. In the final poem, this anger is made energy and power; Ivánova ends the pamphlet with an equation about the hammer’s potential, rather than relying on literary illusion – e=mv2. This is a call to arms. Vihena ends his introduction by urging us to ‘hammer on’. And Ivánova asserts that, yes, as long as women and people must ‘sleep with a hammer | under [their] pillow,’ for fear, that hammer will always be a threat – will be, and must be, primed for attack.

Annie Fan is a writer, and a law student at the University of Oxford where they are president of the poetry society. Their poems and short stories have appeared in Poetry London, Ambit, and The Manchester Review, among others.